FIXING THE FUTURE: THE IMPORTANCE OF ROASTING AT THE ORIGIN 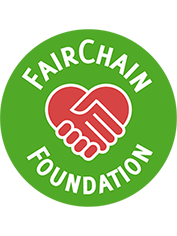 The partnership between FairChain Foundation and Moyee Coffee started in 2012 with the goal of radically revolutionising the coffee industry and proving that supply chains based on equality and the empowerment of all (including the first mile of the chain) are possible. An important step to achieve this: roasting the coffee at the origin.

At FairChain Foundation, we believe in social entrepreneurship over development aid. As the origin of Arabica coffee, Ethiopia – the country where we are operating with Moyee Coffee – has enough premium coffee beans to be a well-off nation.

By shifting back some of the value-adding activities – such as roasting and packaging – to Ethiopia – the country of origin – we have exponentially increased the country’s earning capacity and reduced their need for aid. In other words, roasting at the origin will triple Ethiopia’s revenue ‘overnight’. Imagine us achieving this across the entire global coffee belt!

WHY COFFEE BRANDS NEED TO START ROASTING AT THE ORIGIN

Normally, a coffee bean begins life as a cherry growing on a coffee plant attended to by farmers. Once harvested, the beans are washed, cleaned and dried and become what we call (unprocessed) beans. In their journey from highlands to harbours for export, various middlemen handle the green beans and take a small piece of the profit. The roasting and packaging of green beans take place almost exclusively abroad, primarily because this is where the real value is created. Actually, 90% of the total value of every cup of coffee is exported away. In other words, only 10% stays in the country of origin. Out of this 10% just 2% is considered ‘value-adding’.

Together with Moyee Coffee, we have been creating an alternative for the above: by roasting in the country of origin instead of exporting away green beans, more profit remains in the hands of the men and women who contribute the greatest to the chain. And since we remove all the middlemen muddle, creating an ultra-short chain, consumers can enjoy premier grand cru coffees for affordable prices. Our goal is to create an equal value split: 50% for the country of origin, 50% for us.

FROM ROASTING IN ETHIOPIA TO ENTERING KENYA AND COLOMBIA

To be able to roast in Ethiopia, an ISO certified roasting facility was set up. Using the insights and expertise we gained in Ethiopia, we have expanded FairChain to Kenya and will soon set up shop in Colombia as well.

By the end of 2020, we were supporting 61 value-adding jobs across our roasteries in Ethiopia and Kenya. This has gone up from 18 jobs in 2015 when we started. This number represents the jobs created by opening local roasteries and sustaining those jobs over the years.

The jobs supported in 2015 were those created by starting the roastery in Addis. Five years later, we opened an even larger roastery there, creating even more jobs. This and the start in Kenya explains the increase over the last year.

In 2019 we began roasting in Kenya. Moving Moyee’s Triple production to Kenya allowed us to create even more local value-adding activities that will eventually boost even more our percentage of beans roasted at the origin.

61 jobs supported – By the end of 2020 we were supporting 61 value-adding jobs across roasteries in Ethiopia and Kenya.

€575.000 left at the origin – By roasting locally, we leave behind more than 5 times as much value in the country of origin compared to the industry average. In practical terms, this meant in 2020 that €575,000 of profits and income stayed in Ethiopia and Kenyan hands as against just €19,000 in 2015.

12,300,000 cups drank – If we measure FairChain awareness by cups, then in 2020 that awareness rings in at 13.6 million cups. This is the number of cups of FairChain coffee drank by our friends and fans. This is a radical increase from 3.7 million cups in 2015. We like to think we sparked a bona fide FairChain movement. Our ambition is to inspire consumers to make conscious decisions that have real impact.

THE FOURTH WAVE OF COFFEE

Together with Moyee, we aim to champion the Fourth Wave of coffee and to lead with our regenerative and redistributive FairChain business model as the right approach for the 21st century to the profit-obsessed model still being peddled by Big Coffee conglomerates.

We hope that our healing, regenerative and redistributive business model will inspire many brands to follow our lead. Just think of how Beyond Meat is influencing the meat industry and Oatly the milk industry. Bravo! We aim to be this for coffee.